On April 23, 2021, Stanford University Reported the following: (The whole article may be read here)

The Environmental Protection Agency (EPA) largely remedies Superfund sites containing asbestos by capping them with soil to lock the buried toxin in place. But new research suggests that this may actually increase the likelihood of human exposure to the cancer-causing mineral. 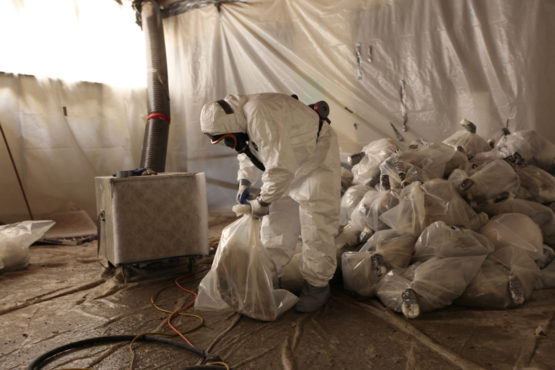 “People have this idea that asbestos is all covered up and taken care of,” said Jane Willenbring, who is an associate professor of geological sciences at Stanford University’s School of Earth, Energy & Environmental Sciences (Stanford Earth). “But this is still a lingering legacy pollutant and might be dribbling out pollution, little by little.”

Willenbring has published several studies about asbestos behavior and, most recently, turned her attention to the lack of information about how asbestos may move through the soils where it is stored. Through lab experiments with asbestos fibers, which were detailed in a paper published Jan. 27 in the Journal of Hazardous Materials Letters, she and colleagues determined that the soil’s organic material actually enables the asbestos to move through the ground and potentially into nearby water supplies.

They found that dissolved organic matter changes the electric charge on asbestos particles and makes them less sticky, thereby enabling them to move faster through soil. The work disproves the prevailing theory that asbestos fibers cannot easily move through soil – an assumption that has been made in part because of the mineral’s hair-like shape.

“It’s surprising that even though these little fibers are so long, because their shortest diameter is small enough, they can wind their way through these soil pores,” said Willenbring, who is senior author on the study.

Inhalation of asbestos increases the risk of developing lung disease and lung cancer, and exposure could occur through irrigation, taking showers, using humidifiers or other unfiltered sources that disperse water into the air.

Asbestos is a naturally occurring mineral that mainly forms in the subsurface, at the boundary of Earth’s oceanic and continental crusts. For much of the 20th century, it was revered as a miracle building material for its high heat capacity and insulation properties, and mining and production boomed worldwide. Following widespread evidence of its link to cancer, including a rare and aggressive form called mesothelioma, production of asbestos in the U.S. declined dramatically starting in the 1970s. 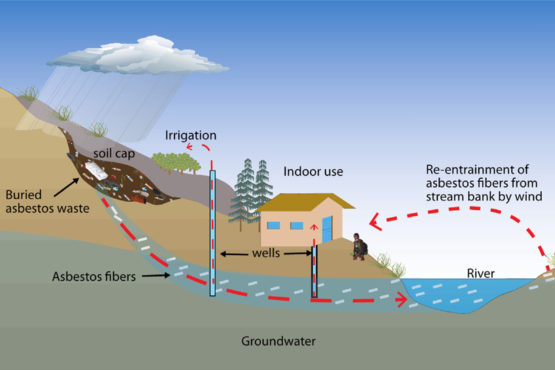 In addition to thinking that the shape of the fibers would inhibit transport, the scientific community has been influenced by a 1977 EPA report that minimized the threat of asbestos moving through soil. Since then, new findings about the role of colloids – microscopic particles that remain dispersed within solutions rather than settling to the bottom – have led researchers to challenge the assumption that asbestos stays fixed in soil.

“Now we can show that exactly the thing that they do, which is add manure or other organic sludge to the asbestos piles that creates the production of dissolved organic matter, is exactly what causes the liberation of asbestos,” Willenbring said. “It’s actually facilitating the transport of asbestos fibers.”

In some ways, the team’s breakthrough about asbestos is not surprising because it aligns so closely with recent findings about the transport of colloids in soil, Willenbring said. But she was stunned by the scale of the problem: Millions of people in the U.S. are living near thousands of sites contaminated with asbestos.

At least 16 Superfund sites contain asbestos and areas where the mineral naturally occurs can also pose a risk.

As part of the lab experiments, Willenbring and her team sampled soil from the BoRit Superfund Site in Ambler, Pennsylvania before it was capped in 2008. The waste dump is located next to a reservoir, as well as a stream that feeds water to the city of Philadelphia.

However, there is a silver lining to the team’s discovery.

“Not all types of dissolved organic matter have the same effect on asbestos mobility,” said lead study author Sanjay Mohanty, an assistant professor at UCLA’s Civil and Environmental Engineering who collaborated with Willenbring on the experiments. “Thus, by identifying the types that have the worst effect, the remediation design could exclude those organic amendments.”

As part of the remediation strategy, some sites include vegetation planted on top of the soil to prevent erosion. Willenbring’s ongoing research involves figuring out how fungal-vegetation associations may be able to extract iron and make the asbestos fibers less toxic to people.

“It’s not just inflammation in the lungs that’s a problem – there’s a process by which iron contained in the asbestos fiber is actually responsible for causing DNA damage, which can lead to cancer or mesothelioma,” Willenbring said.